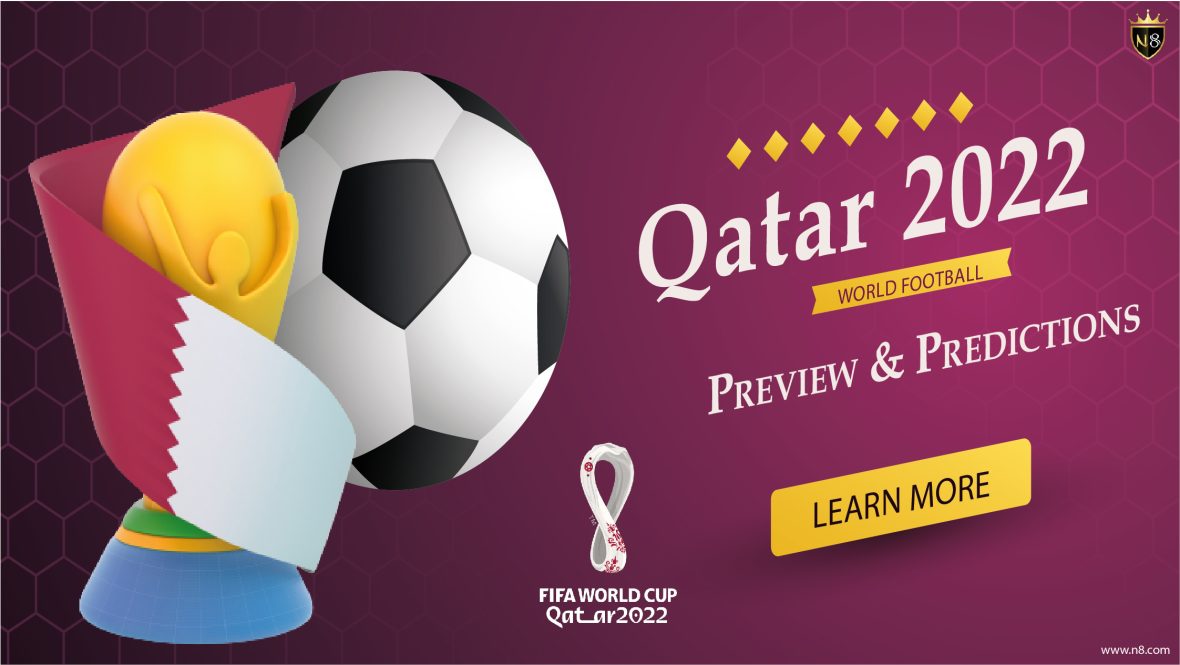 The stage is set for the biggest football extravaganza as the world will have its eyes trained on Qatar for the next four weeks. The top teams in the world will converge on Qatar in 2022 to compete for the title of world champion and a place in soccer annals. Here at N8, you’ll have access to the best FIFA World Cup betting tips, and predictions, combined with the best odds on the World Cup. We shouldn’t waste any more time; instead, let’s see what FIFA World Cup 2022 has in store for us!

As a result of the World Cup’s inherent unpredictability, the competition never fails to thrill viewers and bettors alike. If the latter describes you, you’ll be pleased to know that we’ll be devoting significant time and attention to each category as we build up to the competition.

Our analysts examine the data, weigh all of the possibilities, and check the odds at multiple bookies before settling on a prediction for the World Cup. With this much information at your disposal, you can’t help but make well-informed decisions.

The opening game of the 2022 FIFA World Cup will be played on November 20 at Al Bayt Stadium in Al Kohr, and will feature the hosts, Qatar, taking on Ecuador. The 32 teams competing in the FIFA World Cup 2022’s knockout phases will be split into 8 groups of four to begin the tournament with a series of round-robin group stage matches. The top two finishers from each group will advance to the next phase. The groups are as follows:

Who will reach the finals of the FIFA World Cup Qatar 2022?

There are two teams at any World Cup that you just must not overlook. Brazil, the most successful squad in the history of the championship, and France, the team that last lifted the cup. Brazil holds the record for most championships won with five. Though it’s been 20 years since their last victory, which came in 2002 when they overcame Germany in the final on Asian soil, the Brazilians are a formidable foe right now thanks to the hot play of superstars like Neymar and Vinicius Junior.

France, who, four years ago in Russia, won the title by beating Croatia. Consequently, our outright odds suggest that these two teams have the best chance of reaching the final this season. And this is reflected in the forecast made by  N8’s FIFA World Cup betting specialists.

There is one more team that’s been a favourite in the build up to the competition – Argentina. Messi’s team now looks and plays like a well-oiled machine. They are coming into the World Cup with the most unbeaten games in football history. They’ve won the Copa America and defeated the European champions.

Why Brazil and Argentina are the FIFA World Cup betting favourites

While not as dominant as in the past, Brazil still has a deep and talented squad, which makes them the odds-on favourite.

With players like Neymar, Vinicius Junior, Gabriel Jesus, and Roberto Firmino in the attack, and Alisson and Ederson between the pipes, as well as Thiago Silva, Marquinhos, and Eder Militao in the middle of the defence, the Brazilian national team is formidable.

Casemiro and Fabinho, two defensive-minded midfielders, offer excellent protection, but there is a vulnerability on the wings, and there is no clear creative impact to feed a talented forward line.

They’re in a favourable Group H with Serbia, Switzerland, and Cameroon and should advance to the knockout stages. If they finish first in their group, though, they might be given a more difficult road to the championship round.

They don’t seem to have a better case than Argentina, who overcame them to win the Copa America in July of last year and is currently undefeated in their past 35 matches heading into their upcoming tournament in Qatar.

Argentinean talisman Lionel Messi has found his form again for Paris St. Germain this season, while the club has established a solid defensive tandem in Cristian Romero and Nicolas Otamendi.

The trio of Saudi Arabia, Mexico, and Poland is not one of whom you should be overly fearful of.

On the other hand, England and France are two betting favourites worth taking the other side against.

Although they lost to Italy in the finals of Euro 2020 last summer, the Three Lions had a very easy draw in their home stadium.

However, since then, their defensive shortcomings under coach Gareth Southgate have been exposed, and they were relegated from the top division of the Nations League after going winless in six games and losing twice to Hungary.

France also had trouble in the backline throughout the Nations League, winning only one of their six matches. Although Les Bleus avoided relegation, they beat Denmark twice and lost at home to Croatia.

There must be some doubt as to whether or not Didier Deschamps still has what it takes to coax the best out of his great squad.

The Dutch have a good shot of making it out of Group A, which also includes hosts Qatar, Ecuador, and Senegal. They have a pretty strong spine on their side, so if they can make it to the top of that section, they might be rewarded with a fantastic knockout route.

Belgium’s golden generation has one last shot to advance, but they’ve failed so far and have been passed over once more. Meanwhile, Portugal appears to be highly top-heavy, with their defence nullifying their star-studded offence.

Spain dominated Euro 2020 last year, and they seek to win the World Cup for the first time since 2010 if they can replicate their performance.

Few gave Spain a chance to win the Euros last summer, but they surprised everyone by making it all the way to the semifinals, where they were ultimately eliminated by eventual champions Italy on penalties despite winning the shot count 16-7 in the 1-1 draw.

They have the proper mix of youth and experience on their roster, and players like Pedri, Ferran Torres, and Gavi, all rising stars at Barcelona, should have benefited significantly from playing in the Champions League.

Even if Spain’s lack of a clinical striker may be their weakness, if La Roja continues to create scoring chances at the rate they did at the Euros, they will be impossible to contain.

Group E features Spain and Germany, and with Costa Rica and Japan as their opponents, it’s likely that both teams will advance.

While the Germans will have their fans, the Euro 2020 champions Spain appear to be the team to watch.

Although many people have Denmark pegged as a dark horse to win the World Cup, Croatia just topped their group in the Nations League by defeating France and the Danes twice.

Croatia finished second to France in Russia in 2018, and it took them some time to recover from their disappointment, as key players such as Mario Mandzukic and Ivan Rakitic announced their retirement from international duty.

However, they have kept a lot of their best players, and they appear to be turning things around after losing only one of their last 15 international matches.

In a group including Belgium, Canada, and Morocco, Croatia stands out as the clear favourite to advance because of their impressive resume.

But who will be the FIFA World Cup 2022 champions?

Brazil and France are the two most likely contenders to lift the World Cup trophy in 2022, thus they naturally get the best Outright odds. We have already discussed the illustrious Brazilian squad, but the current winners, France, are no less impressive.

Injuries to Paul Pogba and N’Golo Kante, two of the team’s most important players from their title-winning season four years ago, will hurt, but France still has a strong roster full of brilliant players. What’s more, they now boast the world’s greatest player in current Ballon d’Or winner Karim Benzema, a notable upgrade from their Russia 2018 roster.

The striker for Real Madrid and the red-hot Kylian Mbappé might be unstoppable for any defence in Qatar. Even if other teams like Leo Messi’s Argentina (7.40) and the Euro 2020 champions England (8.40) are also in the running, we think France has a good chance of successfully defending their championship.

Who will be FIFA World Cup’s top scorer?

One of the many ways in which the 2022 World Cup in Qatar will stand out is that it will be held in the middle of the regular playing season. This is significant because many of the best players won’t be drained by yet another gruelling club season, as has been the case in recent years.

Naturally, we anticipate that the 64 games will be filled with footballing miracles and a plethora of goals. Additionally, the tournament’s highest scorer will be awarded the Golden Boot, one of the tournament’s most renowned individual trophies.

Although we have already named goal-scoring machines like Neymar, Mbappe, and Benzema, we believe another brilliant name may end up taking home the award. This person’s name is Lionel Messi. The Argentine may never compete in another World Cup, so he intends to make the most of this one.

With Argentina drawn into a tough group alongside Saudi Arabia, Mexico, and Poland, Messi could end up scoring several times in the preliminary round alone. If Argentina does well in the competition, Messi should have many more opportunities to score.

Why choose N8 for the FIFA World Cup betting win

N8 Games has the best customer service of any sports betting site that focuses on India. And we’re not just about football, we offer plenty of other sports and casino betting options.

When it comes to the FIFA World Cup, there are a lot of different pre-match, live betting, and outright betting markets for sports betting on N8 Sports.

We offer many easy ways of payment options, all of which are designed with the highest security standards possible, making sure that all the data are always completely safe.

Our customer service team is friendly, helpful, and knowledgeable so that all questions and problems can be solved with as little trouble as possible.

The N8 app lets you do the same things you can do on a desktop or laptop, so you’ll always be able to use N8 Sports on the go.

N8 has the best betting bonuses that are as good as or better than anything else on the market, plus special FIFA World cup promotions and a good loyalty programme.

Why would you even consider looking elsewhere?