Kabaddi Betting Guide and Tips You Should Know 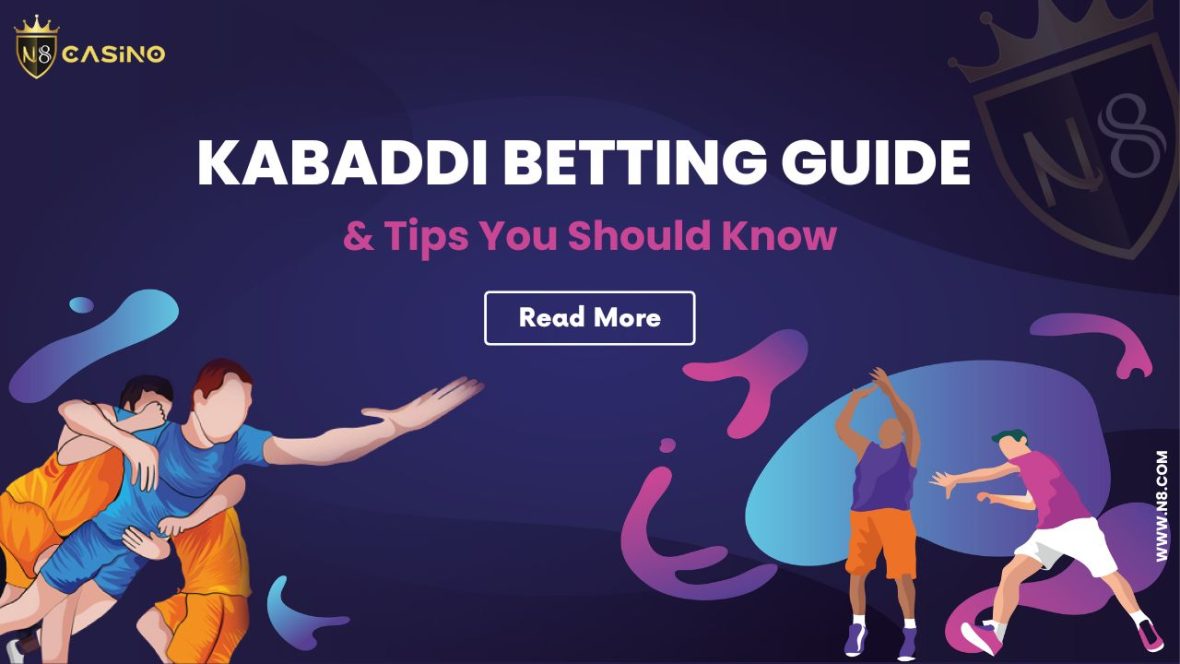 Kabaddi is a sport that has been popular in India and across the world for many years. However, the sport’s popularity and reputation have grown in recent years as a result of the establishment of several leagues and tournaments, particularly the Pro Kabaddi League in India. Ever since Kabaddi has become a popular sport across the world, many online betting sites, including reputable ones like N8 Casino, offer Kabaddi as a sport to bet on. Betting on Kabaddi is easier than betting on more popular sports like cricket or football, since the tournaments and markets are smaller.

Despite the sport’s long history in the subcontinent, the Kabaddi betting sector is relatively young. Its expanding popularity may provide an excellent chance for newcomers to enter the game and participate in the lucrative betting sector. However, don’t just sign up and start betting for the sake of it. Check out our Kabaddi betting guide to ensure you’re prepared and knowledgeable before you start betting.

How to play Kabaddi

Kabaddi is a team sport in which two teams compete against each other. Each team includes seven players and up to five replacements. This game is played on a rectangular court of 13 by 10 metres, with the overall goal of accumulating the greatest score at the end of the game. The goal of the game is for the attacking team's player (raider) to dash onto the opposition team's court and tag as many defenders as possible. In doing so, the player (raider) needs to avoid being tackled by the other team's defenders. The team can get points depending on the raider's amount of tags. The defensive side, on the other hand, earns a point by halting the attack.

The number of professional tournaments has increased dramatically as kabaddi has grown in popularity. The World Cup, Kabaddi Asia Cup, and Kabaddi Masters are all organized by the International Kabaddi Federation. There are also several leagues, such as the Pro Kabaddi League in India, the Super Kabaddi League in Pakistan, and the World Kabaddi League, which comprises teams from India, Pakistan, the United Kingdom, Canada, and the United States. The England Kabaddi Federation UK is another option.

Established in 2014, the Pro Kabaddi League takes inspiration from the Indian Cricket League (IPL). Leading cable TV channels broadcast coverage of this league, which is the most watched.

This competition is administered by the International Kabaddi Federation and was most recently conducted in 2019.

Since 1990, the sport has also been a regular option at the Asian Games. In 2018, Iran became the first team apart from India to win the competition.

Aside from these renowned tournaments, you can also wager on and follow other Kabaddi events. Among these are the European Kabaddi Championship, the Super Kabaddi League, and the Kabaddi Masters. If you want to learn how to wager on a Kabaddi match, make sure you examine the calendar of these tournaments.

Kabaddi is a fast-paced, action-packed sport. As a result, there are numerous betting markets for each game, league, and tournament. The markets are simple to grasp and offer a wide range of betting options. We will describe the most popular ones here to assist you to get started betting.

Types of online Kabaddi bets you can place

Online betting on the kabaddi guide, like other popular sports, provides several sorts of sports bets. Some of the most prevalent betting types are described below:

1. Overall Winner of the Match

You wager on which team will be declared the winner at the end of the game.

2. The number of points scored

You can also forecast how many points the team will earn at the end of the game.

Quite similar to the number of points, you will forecast the total score generated by both sides to place this kind of wager.

These are common while betting in-play and are also known as proposition bets. For example, you can wager on whether a team’s raid will be successful. These bets necessitate a comprehension of team formations and momentum shifts.

This is another common method of betting on kabaddi. Instead of focusing on a single match, you are predicting the tournament winner.

Your kabaddi bets will also vary based on when you place them. It’s termed pre-match betting if you place this before the game, similar to betting on the winner. In-play betting, on the other hand, is when you place your bets during the game.

Whichever betting arrangement you pick, make sure you understand the type of wager you’re going to place. You can boost your odds of winning a kabaddi match by learning how to bet on it.

This is possibly the most crucial aspect of sports betting, particularly in Kabaddi. In this game, 7 players are equally involved, either performing a raid or defending. As a result, before placing a bet, it is critical to analyse each player on a team as well as the team as a whole.

The Asian Games, an international competition, is the most popular Kabaddi tournament. The greatest of the best are invited to compete. To make an informed wager, consider the team’s chemistry, how well they are playing, previous performances, losses, and wins.

If you are supporting India in the Asian Games, you should consider which team has won the gold medal in the past and how good they are this year. Apart from that, India’s previous performance, the average points for India and each time, as well as the opponent’s squad, must be taken into account.

When it comes to players, it is best to see if the crucial players or the stronger players are there or playing in the tournament squad. The previous year’s top raider, defenders, and so on.

To properly enjoy kabaddi betting, you need also pay close attention to the sportsbook you choose. Consider a sportsbook like N8 to be your partner in your sports betting adventure, providing you with incentives, access to game schedules, and competitive odds. Don’t just join up with the first sportsbook you come across online. If you decide to place your kabaddi league bets on the N8 site or N8 app, you can be assured of the best bonuses, and customer support in India.