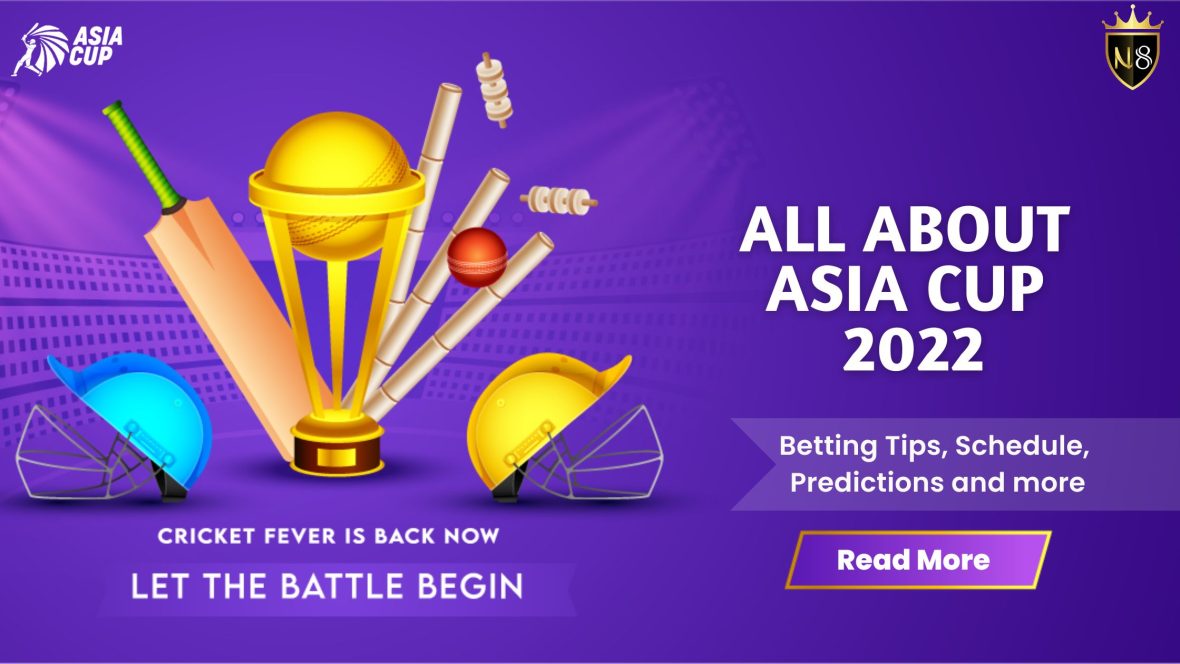 The big battle among Asian teams to claim their supremacy in cricket is just around the corner! In the United Arab Emirates, the Asia Cup 2022 officially began on August 27. This year’s format has been modified from ODI to T20, and it will serve as a warm-up for the impending ICC T20 World Cup 2022 later this year. So what can we expect from the teams vying for the Asia Cup this year? We’ll take a closer look at Asia Cup 2022, and try to provide you with betting tips and predictions.

This year’s Asia Cup was originally scheduled to take place in Sri Lanka. However, due to the country’s economic woes, the UAE was forced to step in as host. The Asia Cup is usually held every four years. However, COVID-19 crashed the big cricketing party and the 2020 edition had to be delayed for this year. The latest Asia Cup, held in the UAE in 2018, saw India win the championship. Will they manage to hold on to the cup? Only time and the team’s forms will tell!

Which teams are playing in the 2022 Asia Cup?

India, Pakistan, Bangladesh, Sri Lanka, and Afghanistan have already confirmed their participation in the event. The sixth team will be determined by the qualification round, which will take place in August. Kuwait, Singapore, the United Arab Emirates, and Hong Kong will compete for the last position on the Asia Cup 2022 team list. The winner will take on the Asian giants.

Before you start betting on the Asia Cup, you should know what the Asia Cup 2022 schedule is. So, check out the complete schedule of Asia Cup fixtures!

Asia Cup 2022 is divided into two groups. Group 1 consists of the qualifying squad, India, and Pakistan. In Group B are Afghanistan, Bangladesh, and Sri Lanka.

The favourites to win the Asia Cup 2022 are undoubtedly India and Pakistan. Over the past year, the men in blue, who are now ranked first in the ICC T20 team rankings, have played good cricket. They have a well-established team that can outwit the enemy at any time.

The main source of concern for Team India is their star batsman, Virat Kohli, who has not made a century in his past 80 international games. Even his spot on the t20 world cup team appears to be in threat. However, with Rohit Sharma’s and the team management’s faith, we anticipate Kohli to return to form and contribute.

Pakistan, on the other hand, appears to be a strong opponent. They have done well in the t20 format since reaching the finals of the ICC T20 World Cup 2021. They have a few standout players, such as Mohammad Rizwan, Babar Azam, Shaheen Shah Afridi, and others, who can be dangerous on any given day. Pakistan would be unbeatable if it can duplicate its success in the ICC T20 World Cup 2021.

While you can certainly bet on the big boys, you must remember that the underdogs also stand a good chance before starting betting on Asia Cup 2022.

Bangladesh will be the dark horse and the team to watch in the Asia Cup 2022. They have always caused problems for dominant teams, so a repeat upset shouldn’t surprise us. After recently defeating the West Indies on home soil in an ODI series, the Bangladesh cricket team’s morale will also be high. They constantly provide a threat to the opponent, especially while playing in the favourable conditions of the Indian subcontinent for their spinners.

Afghanistan is another team that should not be taken lightly, as even a single upset can be fatal for big teams.

The reigning champions are unquestionably among the favourites to win the championship. The Men in Blue just set a global record with 12 consecutive T20I wins.

India, the top-ranked team in the ICC rankings, will be aiming for their eighth Continental victory.

However, they have recently struggled with their inconsistency in the batting order. The poor form of superstars such as Virat Kohli, Rohit Sharma, and Rishabh Pant is the reason for concern.

This time round, the Pakistanis are the most fearsome team, with a superb mix throughout their order, not to mention their skill with both pace and spin. Pakistan, currently placed third in the ICC T20 rankings, will be aiming for their third Asia Cup triumph. The team’s sole obvious shortcoming is its inability to handle nerves in high-pressure circumstances and knock-out matches in major competitions.

Always the bridesmaid, never the bride Bangladesh has struggled to maintain composure in high-pressure knockout matches in the previous two Asia Cups. The team’s recent T20 record is also nothing to write home about. Their chance of winning the championship seems a little unlikely despite their being placed 9th in the ICC T20 rankings.

Despite being five-time winners, Sri Lanka are not at their best and are rated eighth in the ICC T20 rankings. However, they have improved their performance in recent months. Even so, if they do win, this one will be an underdog story for the ages!

Afghanistan has been a reliable T20 side. However, we feel they lack the bench strength needed to win the tournament. Afghanistan, now rated 10th in T20Is, has a formidable bowling attack, led by Rashid Khan, that can challenge any side on any given day.

Now we come to the newbies:

Gerhard Erasmus captains this squad, which has a slew of outstanding bowlers and batsmen. It even won the ACC Trophy four times in a row. They also finished second three times.

The Kuwait Cricket Association established the squad. In 1979, they made their worldwide debut. They thereafter began to appear on a regular basis in Asian Cricket Council competitions. Currently, Mohammed Aslam is their captain.

This cricket squad, founded in 1837, has a pretty good ranking. In 2019, it made its Twenty20 International debut and competed in the ICC Men’s T20 World Cup Asia Qualifier. They have a superb group this year, therefore they have a good chance of succeeding.

This squad, which was founded in 1866, also has a long history. In the 2004 Asia Cup, they played their debut One Day Internationals. They were granted Twenty20 International status in 2013. Nizakat Khan, their current captain is a highly rated cricketer. Therefore the squad has a lot of promise!

Which teams have won the Asia Cup in the past?

Predictions for the Final

India, Pakistan, Sri Lanka, and Bangladesh have all had good teams in previous Asia Cup finals. Recent form in the build-up to the Asia Cup has also demonstrated that these sides are on the right track. India, for example, had a fantastic World Cup performance, whereas Pakistan and Sri Lanka are now the top two ranked sides in ODI cricket.

Analyzing all of the teams’ strengths and limitations, we can predict that archrivals India and Pakistan will reach the Asia Cup 2022 finals. Given their recent results, Pakistan will have the upper hand throughout the series.

According to our forecast, Pakistan stands a strong chance to win the Asia Cup in 2022. However, as we have always stated, cricket, particularly T20, is a highly unpredictable game, thus the ultimate result of the forecast can always be different.

These chances are likely to vary and change as the event approaches, but it is impossible to determine who is the greatest bet for the championship at this time. India is the obvious choice, but its recent behaviour has been concerning. India is the defending champion, although they have also been struggling recently.

Bangladesh, Sri Lanka, and Afghanistan have also shown potential in recent years, but they have yet to show that they are capable of winning a tournament of this magnitude. And Asia Cup odds are sure to change as the competition progresses.

The Asia Cup 2022 will be televised live on the Star Sports network in India. You may also subscribe to Disney+Hotstar, which has purchased the tournament’s streaming rights.

Which team has won the Asia Cup most times?

With 7 title wins, India is currently the most successful team in the Asia Cup.

Who are the favourites to win the Asia Cup in 2022?

It’s still way too early in the competition, so predicting which side will win is difficult. However, based on their present form, Pakistan has a decent chance of winning their third Asia Cup. However, we wouldn’t rule out India, who are undoubtedly the strongest Asian cricket squad at this point in time.

Which are the top betting sites for the 2022 Asia Cup?

If we had to pick only two sites for Asia Cup betting, we’d go with N8 and Uwin. However, there are several other cricket betting sites that are as good and provide a safe and dependable online betting platform.

Why bet with N8 for Asia Cup

The N8 sports betting site has always offered the best odds possible for our users. You may compare our odds to those of our competitors and realise that we provide the most profitable odds. Aside from betting on the Asia Cup 2022, you may also wager on any other cricket event – be it ODIs, T20, or Test Matches.

Our odds should give you a better indication of what to anticipate from the next Asia Cup. So, keep an eye on the Asia Cup 2022 match schedule, examine the Asia Cup points table, and start placing your bets.  The more your bet, the more chances you have of winning!